DIVISION C3
Flinders Park are again premiers of C3 after beating Plympton by seven-points. Plympton trailed all day but showed good determination with a 20-point last quarter while keeping Flinders Park to seven points. Flinders Park managed to hold on and come out on top and finish the season as premiers.  Flinders Park: 7.9-51 to Plympton: 6.8-44

DIVISION C5
Lockleys end the season both minor premiers and premiers after beating Salisbury by 76-points. The game was close early with Lockleys only leading by 12-points at the half before kicking seven goals in the third quarter. Matt Ransom and Stavros Gatis dominating up forward for Lockleys kicking five goals each.  Lockleys: 16.8-104 to Salisbury: 4.4-28

DIVISION C7
St Peter’s OC beat Minor Premiers Golden Grove by 45-points to end the season as premiers. St Peter’s OC lead for a majority of the day with their mix of youth and experience proving too much for Golden Grove. St Peter’s OC: 11.8-74 to Golden Grove: 4.5-29
To continued reading please click here to download. 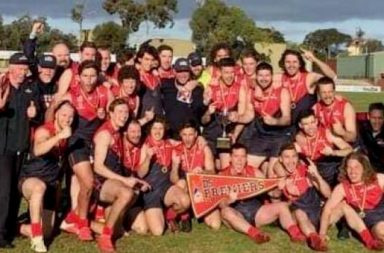